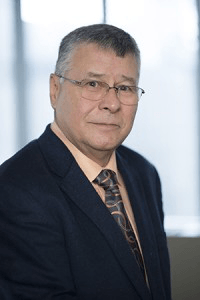 In October 2004, John Beaucage was elected as Grand Council Chief to serve the 42-member First Nations of the Anishinabek Nation. John was re-elected in 2006, by acclamation, a rare occurrence in the history of one of Canada’s oldest First Nation, political organizations. Prior to his election as Grand Council Chief, John Beaucage was the elected Chief of Wasauksing First Nation and served in that capacity for four consecutive terms.

John Beaucage is a graduate of the University of Western Ontario with a combined degree in English and economics, and he has done post-graduate work in First Nation planning at the University of British Columbia. He also was the recipient of a Honourary Doctor of Letters from Nipissing University in the 2009 Convocation. An economist by education, John worked for the Canada Mortgage and Housing Corporation (CMHC) for over 15 years in Ottawa, Thunder Bay, Toronto, Regina and Saint John, New Brunswick. After leaving CMHC in 1989, he and his wife started a number of successful businesses in retail and in property development and management.

In May of 2008, John Beaucage was appointed Chairperson of the First Nations Market Housing Fund. The $300M Fund was first announced in Budget 2007 and is a new and innovative way to give First Nations citizens the opportunity to own their homes on reserve.

Since leaving his position as Grand Council Chief, John now serves on a number of boards and is working on developing green energy projects with several First Nations across the country. He has also has been involved as a Mediator with land disputes and was appointed as Special Advisor to the Minister of Children & Youth Services, which resulted in a much publicized report on the state of native child welfare in Ontario.

Eyaabay (his traditional name) is a Pipe Carrier from the Bear Clan. A citizen of Wasauksing First Nation, he was raised on the Shawanaga First Nation and has extended family in Nipissing, Curve Lake and Moose Deer Point First Nations.

John and his wife Bonnie have been married for 38 years and have four children and eight grandchildren.